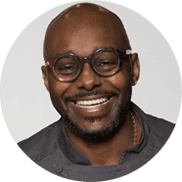 Chef Richard Ingraham was born and raised in Miami, Florida and became a culinary enthusiast at an early age. His culinary training took place at the Art Institute of Atlanta. A few years later, he was offered what is now his current position as Private Chef, for Dwyane and Gabrielle Wade. He has been responsible for the nutritional diet that keeps the celebrity couple fit, toned, and healthy.

In the fall of 2017, Chef Richard Ingraham published his first inspired-living cookbook titled “Eating Well to Win.” The book seeks to evoke a peak performance lifestyle for the aspiring athlete trying to build muscle, housewife trying to cook balanced meals, and the young professional working 70 hours per week.